Since it was first launched over a decade ago, Office 365/Microsoft 365 has grown to be one of the most-used cloud productivity platforms in the world. According to Microsoft, there are now over 300 million commercial paid seats for the platform. One reason that companies of all sizes are attracted to Microsoft 365 is that it has continued adding value over the years. For example, when it was first launched, it mainly consisted of Word, Excel, PowerPoint, and Outlook, with just a couple of additional applications.

Since that time, there have been over 24 new applications added to the cloud service expanding its capabilities into the territory of team messaging, video meetings, online forms and calendars, cloud storage, and more. Users of Microsoft 365 and Office 365 Enterprise plans have largely enjoyed the additions that have been added over the years without significant increases in the subscription price. But that’s about to change for many business and enterprise plans come the new year.

Microsoft announced that it is increasing commercial prices for Microsoft 365 in what it describes as “the first substantive pricing updates since we launched Office 365.”This is going to change some budgets for cloud services, so companies need to be prepared for the increase, which is happening on March 1, 2022.The price increase is global, but it’s not going to happen across the board on every plan. For example, educational users and home users aren’t impacted. Neither are companies that use Microsoft 365 Business Standard. Here are the increases that companies will see early next year:

Why The Price Increase?

Microsoft lays out a few different drivers for this substantial increase in pricing.

Microsoft 365 users have continued to benefit from the infusion of AI and automation into the platform over the years. These enhancements, which impact workflow in multiple apps, help users save time and boost productivity. Here is an example of some of these capabilities that have been added recently:

As the cybersecurity landscape continues to get more dangerous, Microsoft has added more protections for users to deploy inside Microsoft 365 and Office 365 Enterprise. Compliance with new data privacy regulations has also been something that the platform has kept up with. Companies can rest assured their work tools have the capabilities to meet even the most stringent data protection requirements. Some of the recent enhancements include:

Microsoft has been on the cutting edge of video and audio conferencing ever since the pandemic hit. Teams has expanded its capabilities significantly, and next year will be taken into the 3D virtual reality world. Companies can now have Teams video calls with different countries, utilizing automatic translations and captioning that supports 44 languages and dialects. The platform has also been one of the first to incorporate both video meeting and webinar registration capabilities.

Microsoft is not slowing down on the addition of new applications to Microsoft 365 plans. It just announced an upcoming app called Microsoft Loop (a new component-driven canvas tool).It also recently added the online diagram-making tool, Visio (web version) to Microsoft 365 plans to enable companies to easily create informative diagrams for any type of business need. Mesh for Teams is also on the horizon in 2022 and will enable 3D avatar and environment capabilities inside the team workspace.

Optimize Your Microsoft 365 Use to Get the Most Value

Are you taking advantage of all the apps and AI-driven features in Microsoft 365? Copperband Technologies can help your southern Kentucky or Middle Tennessee business ensure you’re not leaving any value on the table. Contact us today to schedule a consultation! Call 931.263.8000 or reach us online. 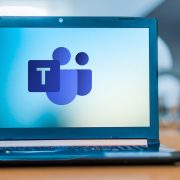 4 Valuable Reasons You Should Be Leveraging Teams in Microsoft 365

Have You Been Wanting Your Own Business App? Learn How you Can Do That & More with MS Power Platform

7 Major Updates Microsoft Is Doing in Teams and Security

How Microsoft’s Investment in Remote Teams Can Benefit Your Company

Microsoft 365 for Business Now Has Visio for Free (Benefits & Features)

What Are the Best Ways to Secure Our Microsoft 365 Business Account?

New Disturbing Phishing Trends You Can Expect to Continue in 2022